by learningmum on Dec 27, 2010 | No comments
Posted under: Flash Cards, Learning & Teaching 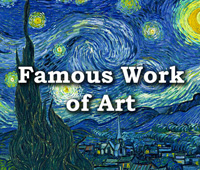 This set of flashcards consist of 10 pieces of well known works of art. A variety of worsk such as Statues, Paintings and Prints were chosen for this set.  Works shown include Statue of David, Pieta, The Last Supper, Impression, Sunrise, The Starry Night, The Red Room, Great Wave of Kanagawa, The Scream, The Thinker and Potrait of Adele BlochBauer.

Here is a short intro to each artwork :

5. The Starry Night,(1889)
Is an oil painting by Dutch post-impressionist artist Vincent Van Gogh. The painting depicts the view outside his sanatorium room window at night, although it was painted from memory during the day. This work inspired quite a number of creative work, including music, songs, poems.

6. The Red Room (The Dessert: Harmony in Red ) (1908)
Is a painting by French artist Henri Matisse. It is considered by some critics to be Matisse’s masterpiece.The Red Room, depicts a maid arranging fruit on a table in a room dominated by its vibrant red wallpaper. The walls were originally blue, but Matisse was disatisfied with the final result and decided to paint them red.

7. Great Wave of Kanagawa (1832)
Is a famous woodblock print by Japanese artist Hokusai.Thiis is the first print of a series 36 Views of Mount Fuji. In The Great Wave, there are three boats among the turbulent, broken waves. Tiny humans are tossed around under giant waves, while the sacred, enormous, snow-capped Mt. Fuji is just a hill in the distance.

8. The Scream (1893-1910)
Is the title of expressionist paintings and prints in a series by Norwegian artist Edvard Munch, depicting an agonized figure against a blood red sky. The landscape in the background is Oslofjord, viewed from the hill of Ekeberg, in Oslo (then Kristiania), Norway. The Scream is one of very few works of modern art that are instantly recognizable to a broad audience. It had make its appearance in many works of advertising, flim and cartoons.

9. The Thinker (1902)
Is a bronze and marble sculpture by Auguste Rodin
was originally meant to depict Dante in front of the Gates of Hell, pondering his great poem. (In the final sculpture, a miniature of the statue sits atop the gates, pondering the hellish fate of those beneath him.) Over twenty casts of the sculpture are in museums around the world. Some of these copies are enlarged versions of the original work, and some are sculptures of different scales.

10. Potrait of Adele BlochBauer 1(1907)
Is a painting by Gustav Klimt
Is the third most expensive painting ever sold at $135 million. This painting took three years to complete and is made of oil and gold on canvas, showing elaborate and complex ornamentation.