Babies & Boardroom: Can you have it all?

by Focus on the Family Singapore on Feb 25, 2015 | No comments
Posted under: Parenting

I had a meeting the other day with my male boss, in my bathrobe. 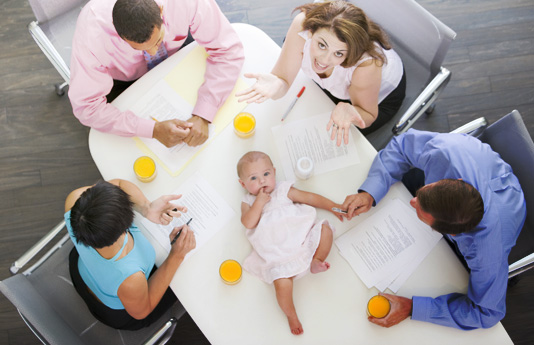 Babies in the boardroom?

No, it’s not what you think. I was at home spooning cough syrup into my 10-year-old, who was suffering from a cold. But I was also taking part in a morning editorial meeting with my boss and several colleagues some 30 miles away, in Reston, Virginia — via telephone.

I am a telecommuter — one who uses the Internet, fax machines and telephone lines to reach out and touch their employers from home.
It’s the perfect way to combine parenthood and profession — to have it all (or most of it, anyway). Telecommuting is becoming the work/parenthood balancing act of choice for the new millennium.

At the organization I work for, all four editors in my department — two men and two women — work from home offices spread across Virginia, Maryland and Connecticut. Three of us have young children and bear the primary responsibility for their care. My colleagues and I keep in close touch by telephone, email and fax, and over the years, we’ve become accustomed to phone conversations punctuated by the unprofessional sound of “Sesame Street” and the racket of children asking questions, asking for juice — or asking for a spanking.

In a sense, we’ve gone “back to the future” — back to a system of balancing work and childrearing familiar to past generations of parents.

A Blast from the Past
Nancy Pearcey, executive editor of Chuck Colson’s BreakPoint radio program and a telecommuting mother herself, says telecommuting is helping parents “return to a more humane style of work” — a pattern of work reminiscent of how parents in generations past integrated work and family.
Think back to the colonial era. As Pearcey notes “It was a rugged life, yet one conducive to strong family bonds. With rare exceptions (eg, sailors, soldiers) men worked in the home and its outbuildings or the surrounding fields. Husband and wife worked together in a common economic enterprise and trained their children in the diverse skills needed for survival in a pre-industrial society.”

But thanks to the Industrial Revolution, this cooperative lifestyle began to disintegrate. Productive work began to be carried on outside the home, which led to an inherent tension between the two fundamental tasks of making a living and raising children. The 19th century solution, Pearcey shares, “was to split these tasks between the sexes: Fathers began going out to work in factories and offices” while mothers stayed at home to raise the children.

“By the close of the 19th century, Pearcey writes, “most of the traditional female occupations — such as weaving, baking and brewing — had been removed from the home and transferred to the factory.” Women at home were reduced from active producers to passive consumers, leading to a loss of a sense of self-worth.

The response of early feminists was to urge women to join their husbands in finding work outside the home. “The opposite alternative, of course,” Pearcey writes, “is to bring work back into the home” — to return to the pattern families commonly followed for thousands of years.

Managing Expectations
After five years of full-time working from home while also nurturing children, I can heartily endorse telecommuting as one of the best of those imaginative solutions — for mothers and fathers alike.

Research has shown that to retain their best employees, employers have to provide policies and programs that help employees balance work and family life. When they do, corporations often reap unexpected dividends: lowered absenteeism and a higher level of loyalty. When you think about it, why wouldn’t parents be loyal to companies that let parents feed a baby while doing market research, or spend lunch hour throwing a ball to a 5-year-old son?

So my advice to all those who want it all – choose a job you can perform at home, if only for a few years. Because when you actually have those babies, you’ll find they can’t be fitted around a career, like a hobby, or put on your after-hours “to-do” list. Raising healthy, happy and responsible children will become the most important activity you’ll ever undertake.

This article is adapted and was published on Boundless.org. Copyright © Anne Morse, 1998. All rights reserved. International copyright secured.

« Previous Story “My dad’s story”: Dream for My Child
Next Story » Holiday Camps, Programs and Things to do March and April 2015

Author: Focus on the Family Singapore

Focus on the Family Singapore is a non-profit organization dedicated to helping families thrive. Get equipped with parenting tools and skills through our family life resources and workshops. Visit http://www.family.org.sg/parents for details!