by Focus on the Family Singapore on Oct 28, 2014 | No comments
Posted under: Learning, Parenting 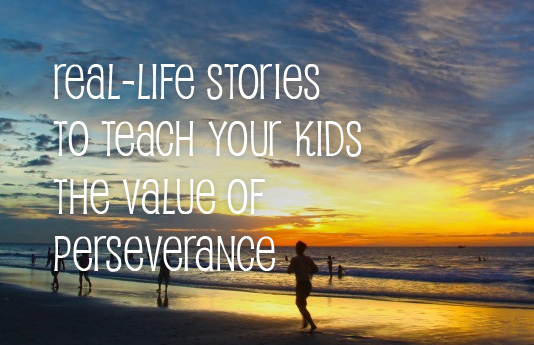 Teach your kids the value of perseverance and resilience.

Do you know why the lights come on when you flick the switch?

Thomas Edison could’ve told you. He invented the light bulb more than 130 years ago. Edison also thought of nearly 1,100 other things that improved the world, including a power generator to make electricity, a record player to record and play back words and music, and a movie camera to film moving pictures.

Edison didn’t hear as well as the other kids, so he couldn’t understand everything the teacher said. Finally, when he was 10, his mother pulled him out of school and gave him books to read. She had been a schoolteacher and knew how to make learning fun for her son.

Chemistry and science were Edison’s favorite subjects. His mother helped him set up a laboratory in his room, but quickly had him move it to the basement because he spilled chemicals and ruined the floor and furniture.

Edison enjoyed experimenting and improving other inventions. Because he wasn’t a fast learner early on in life, he realized the importance of never giving up. And it’s a good thing, since it took him more than 1,500 tries to make the light bulb work perfectly.

Albert Einstein is one of the greatest scientists of all time. But Einstein wasn’t always wowing people with his deep thoughts. When he was a kid, Albert was no “Einstein.”

While many children learn to say words by the time they are 1, he didn’t talk until he was 3 years old. Even as he grew, he had trouble putting thoughts into words. At 9, he rarely talked and spoke very slowly. His dad thought he was stupid, and the elementary school principal told his family it didn’t matter what Einstein studied because he’d never be successful at anything.

He had a lot of trouble memorizing facts. Math fascinated him, because he had to figure out the answer instead of trying to remember the correct fact.

While he disliked school as a child, Einstein enjoyed playing the violin and building things. He loved to put together puzzles and create houses out of blocks and cards. Sometimes his card houses would be 14 stories high!

When Einstein was a little older, his uncle Jakob taught him difficult math problems at home. Einstein quickly learned the concepts and started solving problems that only much older kids were able to do.

By the time Einstein went to college at 17, he was a math and science whiz. He even got an article published in a German science magazine when he was 21.

Twenty-one years later, in 1921, Einstein won the Nobel Prize in physics, as the best scientist in the world.

Rise to the White House

Woodrow Wilson ran the most powerful country in the world for eight years. He was president of the United States during World War I and helped the Europeans defeat Germany. Not bad for a kid who didn’t know the alphabets until he was 9 years old and couldn’t read until he was 11.

Born in 1856 in Virginia, Wilson grew up listening to good books. His father was a Presbyterian minister and everyday his family would gather to pray, sing and read. Although Wilson couldn’t read, his dad made sure he could speak well. He took Woodrow to see new inventions or read chapters from books. Then the two of them would talk about the ideas.

Wilson got sick a lot at college and had to drop out of school. By the time he returned to college at Princeton University, Wilson decided to study politics. He graduated from Princeton and later entered law school.

Wilson’s plan to serve people in government was put on hold when he became a college professor. He taught for 17 years and even became the president of Princeton in 1902.

Eight years later Wilson was elected governor of New Jersey, and two years after that he became the 28th president of the United States.

He will always be remembered for his direct, honest and smooth way of speaking — even if he wasn’t very good at his ABCs.

The use of stories is a great way for parents to teach children values. The National Library is packed with inspiring stories of the lives of individuals that demonstrate great values. More importantly, after reading these stories, parents can ask questions to get their children to think about these values and how it applies to their lives.

For example (based on the above stories):

Of course as parents, the most effective way to instill values is to model them. Tell your children a story about something you had to persevere in, so as to succeed.

An Interview about Play with Carrie Lupoli

Helping Your Child Cope With Failure

Bullying Tips for Children Under 12

How important is visual tracking and scanning?
« Previous Story Cool Halloween Costumes for Kids
Next Story » Handwriting Helps You Learn

Author: Focus on the Family Singapore

Focus on the Family Singapore is a non-profit organization dedicated to helping families thrive. Get equipped with parenting tools and skills through our family life resources and workshops. Visit http://www.family.org.sg/parents for details!