by scoutiemum on Jan 15, 2012 | No comments
Posted under: Outdoors, Parks, Places to go

Haw Par Villa has been around forever. Well, not really but since way back in 1937,  created by  the founders of Tiger Balm as a venue  to preserve Chinese heritage by educating the younger generations on the important lessons in life and it can be a fun place to go with kids. A plaque featuring the founders of the villa and a statue of a dragon near the entrance.

A plaque featuring the founders of the villa and a statue of a dragon near the entrance.

It is one of those destinations that form part of my childhood memory of outings…so when the circle line make it so much more accessible to those of us without a car, we decide to pay a visit there just so our 6 and 8 years olds can get some exposure to Chinese culture and stories. The circle line brings us right to the main gate of Haw Paw Villa.

There are lots to see at Haw par Villa, with many sculptures and figurines and 3 dimensional murals as well as steps, “caves”, “mountains”, pavilions at the grounds. According to wikipedia, there are over 1,000 statues and 150 giant dioramas. Most of these features stories and cautionary tales from legends, folklore and history. Some introduce famous people, deities and sages or or just whimsical and mystical creatures.

The boys were excited upon seeing the mountains, whimsical figurines and the adventure of climbing and running through ‘caves.’ The terrain actually fits the stories around and there are plenty of chances to tell the kids about the folklores associated with the scene. Plenty of “Caves” and “mountains” to explore

We are impress with the detail of the statues and how close some of them are in depicting the scenes in folklore and legends. The kids were intrigue by the statues and help themselves interacting with the statues and make believe plants and scenery. The place is a little old and definitely not as polish and equipped as mainstream museums and gardens, but we were amazed  by the amount of information on legends and stories the place contain. It also carries an old school charm in the way the statues and sculptures depict the familiar stories and legends.

Journey to the West

The ones below are from the famous legends from the “Journey to the West”. One of our favourite status shows Tripitaka’s horse resting besides a stone with words carved on it.The statues and figurines are so life like that it’s easy to imagine you are part of the story . 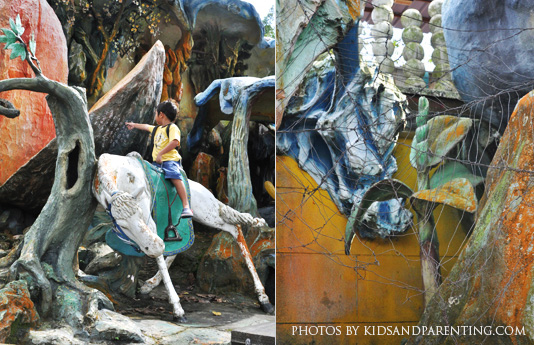 DO supervise closely though. The miniature mountains and rocks offers loads of climbing opportunities and as some of the items such as the spider web is made of wires. While it is placed far and high up, our adventurous boys manage to climb up to it and have a good close look and were seriously contemplating getting closer and touching it. 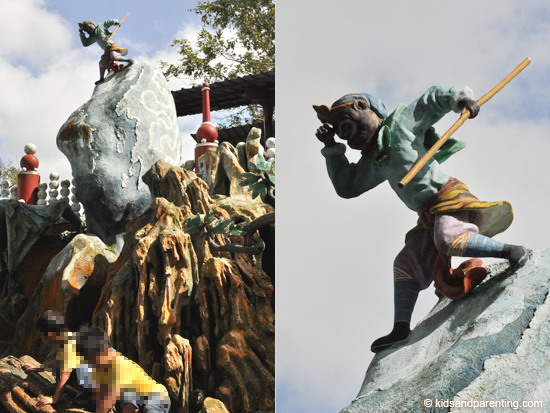 Are the kids trying to emulate the monkey god? 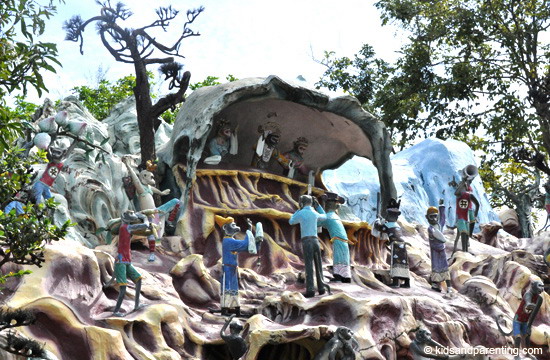 Scene depicting the monkey god at the mountain of fruits and mountain.

There are also plenty of statues of sages and heroes. Below are the statue of Jiang Zi Ya and Confucius. 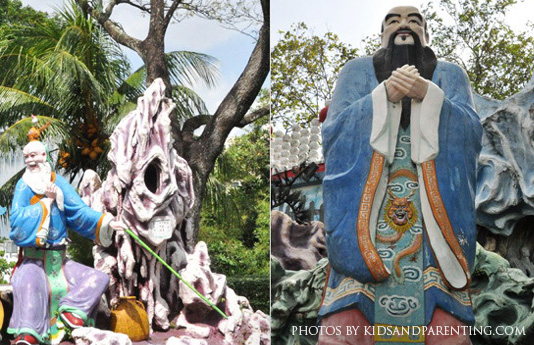 The statues of Jiang Zi Ya and Confucian.

Many murals depicts legends, most of them with a moral behind the story. The 3 dimensional characters captures the kid’s imagination. For almost all the murals and displays, there are clear panels in English, Chinese, Malay and Japanese with so we can get our fill of the stories behind the scenes and figurines we see. 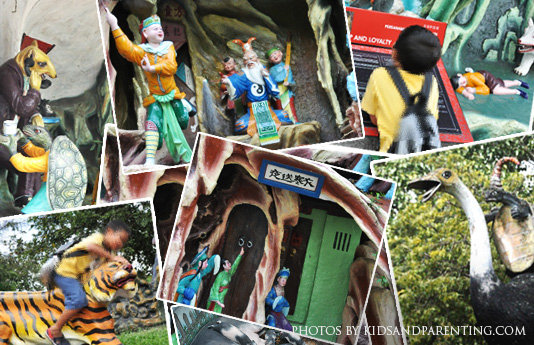 More stories and figurines of animals.

Tip: Bring mosquito repellent/patch and plenty of water. The place can get pretty hot and there are lots of walking and climbing to do.

Nearby: The West Coast Park outdoor playground is just 15 mins drive or a few bus-stops away. After a morning getting to know about cultural folklore and heritage, we proceed to a nice McDonald’s lunch and an afternoon of play over there.

Educational and Fun Places for Kids

Count to Ten! A hands-on gallery for all ages

Mid Autumn Festival Things to Do 2012