by scoutiemum on Dec 30, 2011 | No comments
Posted under: Activities, CoolStuff, Recommendations 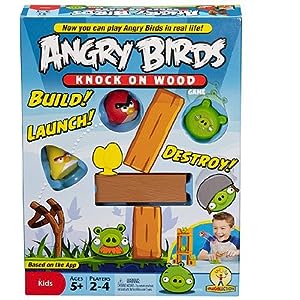 We got the Angry Birds: Knock On Wood Game

as a Christmas gift for our six year old who is love the online version of this game. We have thought that this is just a fun toy with the popular characters but it turns out to be more educational than we have initially thought it will be. The birds, the pigs, the blocks and bird launcher provide hours of fun.

The game requires the kid to arrange the pigs in the structures suggested by the cards which require the kid to interpret the structure shown on the card, then arrange it accordingly. It takes a bit of coordination to balance some of the blocks and hopefully built their motor skills and patience while they play. After that, the kid will aim at the structure with the designated bird to get the satisfaction of the blocks falling down. You get points cards too for fulfilling the “mission” so we get to practice our math while we are at it too. An example of the formation using the blocks So far this game has been a hit and our boy played many hours everyday with it. It is a hit with his play dates too.

The box comes with designated spaces for each of the pieces which helps us make sure that we got all the pieces collected after playing.

Price and where to get: We got ours at Popular Book Store for $39.90 before Christmas. Also saw it at Tom and Stefanie. It seems that it is available at Amazon now for USD$14.97

Fun, Art and Inspiration at the Museum